I am not working on this site and my Russian pages for many reasons. Even my production of "Three Sisters" in the Fall of 1999 proved to be an American show. Maybe I am still angry at Russia and Russians...

Strangely enough one of my reasons for my defection in Rome was the realization that even the Soviet Union with its constant proclamations of the grand mission doesn't believe in it. If there was no future for Russia even in this communist shape. Perhaps, Bunin was right and Russia died in 1917.

So what is out there today?

Read "Father-Russia" Files. All my politics are personal... 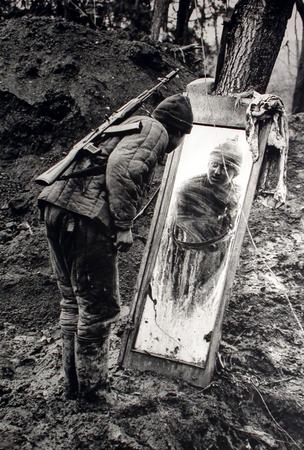 Since the collapse of Russia's economy in August, much has been written about the demise of the business oligarchs--the small circle of influential entrepreneurs who grew rich over the past decade through close ties to the government, currency speculation, and, some say, criminal activities. Indeed, the business empires heavily dependent on the financial sector, such as Vladimir Gusinskii's Most Group and Vladimir Potanin's Oneksimbank, have been seriously damaged by the crash, while Aleksandr Smolenskii's SBS-Agro and Vladimir Vinogradov's Inkombank are ruined. However, entrepreneurs with extensive interests either in natural resources extraction, such as Rem Viakhirev of Gazprom and Vagit Alekperov of LUKoil, or in industry, such as Mikhail Khodorkovskii of Menatep and Boris Berezovskii of LogoVAZ, remain influential, albeit less so than previously.
The oligarchs came to the notice of many people in the West in October 1996, when Berezovskii boasted in an interview that he and six other tycoons had ensured Yeltsin's reelection by bankrolling his campaign. Moreover, he bragged that he and six cronies controlled much of the Russian economy. But while the Big Seven, as the oligarchs came to be called, controlled a large chunk of the economy and had a decisive say on some key issues, their influence was less than Berezovskii had suggested. There were many issues, such as military reform, where they played virtually no role at all. Moreover, there were influential interest groups at the time that Berezovskii did not mention: LUKoil, Gazprom, lobbyist holdovers from the Soviet era such as collective farmers, and regional leaders like Moscow Mayor Yurii Luzhkov.
Since the meltdown, Moscow's Alfa Bank, which has long-standing ties to the Yeltsin administration and whose relatively small holdings in the now defunct short-term securities market left it more or less unscathed, has been able to gain a competitive advantage over its more exposed rivals. In the absence of a strong state treasury, Alfa has been "authorized" to service the St. Petersburg City budget, a task offering numerous possibilities for corruption. Banks that service oil, gas, and precious metals exporters also remain important.
In the regions, the economic collapse has accelerated the formation of oligarchic structures. In Saint Petersburg and Yekaterinburg, local governments have taken over regional banks to ensure ready access to revenue streams. The Nizhnii Tagil Metallurgy Combine has given a 25 percent stake to the government of Sverdlovsk Oblast in exchange for the restructuring of its tax debts and the cancellation of the salaries it owed its workers.
Still other oligarchs are regrouping. The strategic alliance recently announced by LUKoil and Gazprom may strengthen their economic and political clout. Gazprom already pays a quarter of all Russia's taxes, and LUKoil is also a major contributor to the country's tax coffers. Even if they do not unite, the firms will almost certainly remain two of the few effective foreign-policy levers, especially toward Europe and Russia's neighbors.
Indeed, Yevgenii Primakov's government, far from trying to end crony capitalism, appears to be favoring its own cronies. Favored banks participated in several debt swaps orchestrated by the Central Bank in September, and the Central Bank has sharply reduced reserve requirements to increase banks' liquidity. Most of the "socially important" large banks the government intends to save have ties to the new government, Central Bank Chairman Viktor Gerashchenko, or the Luzhkov administration.
The government has announced that it intends to save, among others, Menatep and Most. The former has strong supporters in power, though few depositors and no regional network. The latter's extensive media holdings make it invaluable as the legislative and presidential elections approach. Meanwhile, Oneksimbank, widely considered to have been close to ousted the ousted Sergei Kirienko, Anatolii Chubais, and Boris Nemtsov, has so far been left in the cold.
In the non-banking sector, the government's highly publicized battle with Gazprom over taxes owed appears to have been resolved in the firm's favor. Gazprom will provide food aid to needy Russians instead of paying money to the cash-starved federal government. A shakeup in the leadership of Rosvooruzhenie, the state arms export agency, now under the control of an alleged Primakov protege, suggests that the Russian arms industry may well experience a resurgence as it more aggressively seeks clients for high-tech weaponry abroad.
That is not to say that Russia's business interests win every battle. The government has warned six major oil companies that their access to highly profitable export pipelines will be cut off if they do not draft a plan to sell more crude on the domestic market. There are serious differences among the oligarchs over policy and economic interests, such as protectionism. But since the differences are often over who is to receive increasingly scarce government favors, they are unlikely to benefit the long-suffering Russian public and may well become fiercer as total default looms. What survived the August collapse, however, are the rules by which Russian politics is played. Much of politics is informal, authority is personalized, institutions are weak, the distinction between public and private is blurred, and money is the currency of political power. Some people will doubtless profit financially under such regulations, but economic reform and democratic development will likely stagnate. It was this absence of the rule of law in the sphere of economic reform that the 1998 EBRD Transition Report cited as one of the reasons why Russia's transition has been so difficult.

The author is associate director of broadcasting at RFE/RL. Dec. 7, 1998

Maybe I will be back to this page and Russia... one day. I plan to rework my hyper-drama "The Story of David Z." for Spring 2001 Virtual Theatre workshop. It's about me. And Russia.

I, Putin -- "my generation" chapter (fool.vtheatre.net ?)