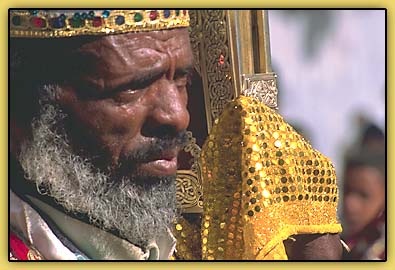 Ethiopia continues to be a staunch ally of the United States in the global war on terror in spite of internal political problems and destabilizing influences from within the Horn of Africa region, Ambassador David Shinn recently told a Harvard University conference.

Shinn, who was U.S. ambassador to Ethiopia in the mid-to-late 1990s, said "Ethiopia has experienced a significant number of terrorist acts" in the recent past - mainly from within its own region - and the United States rightly sees Ethiopia as "one of its most important partners in Africa in the battle against terrorism." But he added, "It has too many inherent weaknesses to be considered a bulwark against terrorism" at the moment.

Shinn made his comments at a November 4-6 conference on terror in the Horn of Africa sponsored by Harvard University's Belfer Center for Science and International Affairs and the World Peace Foundation. Now a professor of political science at George Washington University, he also served as U.S. envoy to Burkina Faso during a 37-year career in the U.S. Foreign Service.

He said President Bush lauded Ethiopia for its anti-terrorist efforts during a meeting with President Meles Zenawi in Washington in 2002 and pledged continued U.S. support. The principal U.S. organization that partners with countries in the region to fight terrorism is the Combined Joint Task Force-Horn of Africa (CITF-HOA) in Djibouti, he added.

Shinn pointed out that during a visit to Ethiopia in February 2003 the commander of CITF-HOA, Major General John F. Sattler, said, "We consider Ethiopia a valued partner in our mission to detect, disrupt and defeat terrorists, who pose an imminent threat to coalition partners in the Horn of Africa region."

But Ethiopia has its problems, Shinn told his Harvard audience. Pointing to a serious lack of true powersharing and weak governing institutions in the area, he said, "As long as there continues to be alienated groups in Ethiopia that believe, rightly or wrongly, they can not achieve their goals through the political process, these [internal and regional] attacks will continue and may worsen" He explained, "Ethiopia shares a boundary with five countries ... [its] land borders are unusually porous, even by African standards. The Horn of Africa serves as the back door to the troubled Arabian Gulf, the source of much of today's international terrorism."

In addition, the alienation of the Somali community within Ethiopia and the spread of radical Muslim fundamentalism throughout the region also pose threats to Ethiopia; problems terrorists could exploit for their own purposes, the diplomat turned scholar said.

Yet, "Ethiopia is not now a center of international terrorism," Shinn stated. "Attacks perpetrated by organizations based outside the Horn of Africa are much less likely." But they could pose "a serious threat if an al Qaeda affiliate decides to target Ethiopia," he added.

Such attacks could be provoked if "a combination of poor Ethiopian decisions on political and economic policy, further alienation of the Oromo and Somali [communities], and deterioration within the security service and army" occurs, Shinn warned.

Countering those tendencies is the Ethiopian People's Revolutionary Democratic Front (EPRDF), the ruling party that has dominated politics in the country since 1991, Shinn explained.

"Although Ethiopia's system of government emphasizes ethnic federalism and delegation of authority to the state governments, the EPRDF continues both subtly and sometimes not so subtly to retain complete control over security forces throughout the country," Shinn told his audience. The Africa expert was quick to add, however, "For a continent that has eschewed federalism, Ethiopia grants a surprising amount of latitude to state governments."

On the legislative front, Shinn said, "Parliament has considerable potential as a meaningful organization, but continues to be largely ineffective. Its authority remains weak and the leadership is becoming discouraged."

Over the short- and medium-term, Shinn said Ethiopia could minimize the threat posed by terrorism. "Improved security, intelligence, border control and the technical ability to monitor the movement of people and money will pay significant dividends," he said. But it is the long-term problems of governance, poverty, social inequality and disadvantaged ethnic and religious groups "that will do the most to create an environment where both indigenous and international terrorists will seek easier targets," Shinn added.

Most importantly, "all countries in the region must end their support for opposition groups that are trying to overthrow regimes in neighboring states," Shinn concluded.

"It is said that within the mountain ranges of Ethiopia one may come across fire breathing dragons. The dragons in question are relatively small lizards, and if they do breathe fire it is probably due to berbere, the most characteristic ingredient in Ethiopian cookery.
This palate searing reddish paste, found in most Ethiopian kitchens and used in preparing many local specialties, consists of hot red chili peppers, garlic, ginger, fenugreek, cardamom, cloves, allspice, nutmeg, white pepper, salt and turmeric. Various sources claim that in addition to adding magnificent flavor to a many traditional dishes, this especially potent mixture will also add to one's longevity, increase sexual potency and cure rheumatism." [ * ]

Buffet trip #1, all kinds of potatoes, lentils, rice, veggies and salads. So good!

Ethiopian food is eaten communally, with everyone eating off of the same platter, picking up pieces of the tasty food with the spongy "injera" bread.

http://jah1.com -- Precious Angel : Ethiopia is a relief organization set up to help the HIV+ children of Ethiopia.

http://www.angelfire.com/rebellion2/rebelliouslion -- This new website is dedicated to bringing all Rasta's together.

http://people.zeelandnet.nl/adamr -- Wisdom of RasTafari .....lots of speeches and more concerning The Lion of Judah